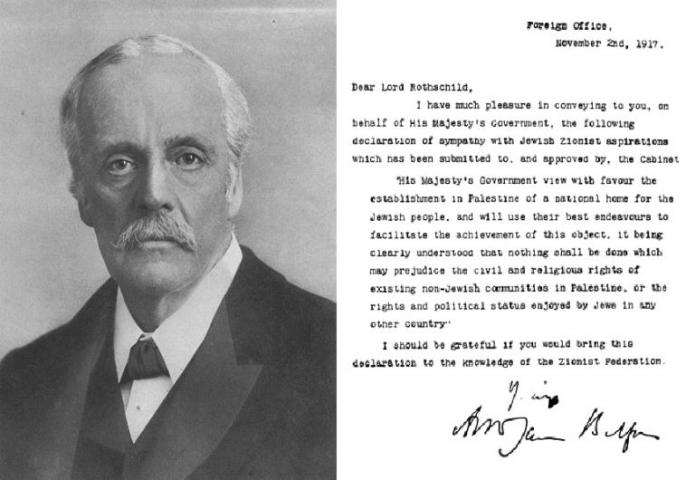 Background on the Balfour Declaration

His Majesty’s Government view with favour the establishment in Palestine of a
national home for the Jewish people, and will use their best endeavours to facilitate
the achievement of this object, it being clearly understood that nothing shall be done
which may prejudice the civil and religious rights of existing non-Jewish
communities in Palestine, or the rights and political status enjoyed by Jews in any
other country.
Arthur Balfour 2 November 1917

You can read international jurist Henry Cattan's chapter on this document here.

Foreign Secretary Boris Johnson wrote a piece for The Daily Telegraph on the 30th of October on the centenary of the Balfour Declaration titled ' My vision for Middle East peace between Israel and a new Palestinian state. It can be found here.

Meanwhile, Prime Minister Theresa May and the Minister for the Middle East Alistair Burt made comments during a debate on the 'Centenary of the Balfour Declaration' in the House of Commons on the 25th of October.

Theresa May said: "We are proud of the role that we played in the creation of the state of Israel, and we will certainly mark the centenary with pride. However, we must also be conscious of the sensitivities that some people have about the Balfour declaration. We remain committed to the two-state solution in relation to Israel and the Palestinians, which is an important aim." More can be found here.

Alistair Burt said: "The Government are proud of the role that the UK played in the creation of the state of Israel. We will welcome the Israeli Prime Minister Benjamin Netanyahu as a guest of the Government on the centenary of the Balfour Declaration. We will mark the centenary with pride and respect, but also with a degree of sadness, as issues between Israel and the Palestinians remain unresolved." More can be found here.