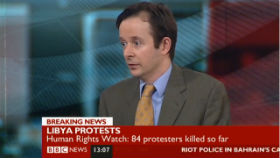 In interviews across the international and British media, Chris Doyle, the Director of Caabu, has said that the violence against Libyan protesters was totally “unacceptable”.  The reports that the regime has “used aircraft and helicopters against its own civilians shows that its threats as articulated by Saif al Islam to fight to “the last man, the last woman, the last bullet have to be taken seriously.”

Given the huge levels of casualties in Libya and the bloody track record of this regime, immediate consideration must be given to re-evaluating Britain’s relationship with Libya.  It cannot be “business as usual” said Doyle, and that the Gaddafi regime was in its last days.  Doyle told the BBC that the international community had been too slow to react and must take immediate action including looking at the option of sanctions and a no-fly zone.  “It is quite clear that the Libyan people, who have demonstrated incredible bravery, have had enough of this barbaric and bloodstained regime and do not want it to remain in power.”