On 11 June Zaina Erhaim spoke at a Caabu event about life in northern Syria.

You can listen to an audio recording of the event in full here.

Zaina is a Syrian journalist, living in the opposition held areas of Aleppo. She works as the Syria project coordinator and trainer with the Institute for War and Peace Reporting. Zaina gave an eye-opening account of day to day life in northern Syrian, speaking movingly about friendship, life and love as well as the destruction to human life caused by the Syrian regime.

Zaina began by saying she was here to give an insight into life in Aleppo through what she has seen and felt and she is not an analyst. She showed video footage she had taken in Aleppo whilst giving the audience an insight into the day to day life of northern Syria and what exactly these videos showed. One section of the video she showed was entitled ‘4 Syrias’ and captured the minibus station in Aleppo. Zaina explained it showed divided Syria with minibuses departing to 4 areas all under the control of different groups, the regime, opposition groups, ISIS, and the Kurdish.

Amongst the videos which showed the destruction of Aleppo, (such as a market which is consistently bombed), were videos of Zaina and her friends doing ordinary day to day activities. Zaina showed a picture of her favourite fast food shop in Aleppo which has continued serving throughout the war despite the surrounding destruction. She also showed a video of her friends celebrating around Christmas, and a video of a picnic taking place near Aleppo’s citadel despite the threat from snipers.

Throughout her account of day to day life there were constant reminders of the threat civilians face. She spoke of the relief snow and rain bring as it meant that there were less likely to be bombs dropped from the air. Most of the war deaths in Aleppo are caused by air attacks and Zaina spoke of the importance of controlling the sky. The fear of barrel bombs is constant and Zaina recalled the anticipation during an attack before the explosion which “sounds like an aeroplane landing next to you” followed by dust, flames and broken glass. 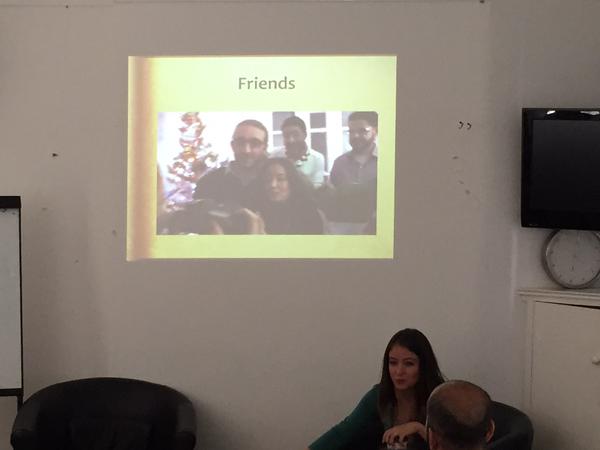 Zaina spoke about how the Assad regime uses the strategy of hitting the same place twice with barrel bombs, one after the other to kill the first repsonders. This, Zaina said, had nearly killed her once. The horrific destruction of the barrel bombs was clear in many of the videos shown, and Zaina spoke about one incident where a bomb exploded right next to a school. She said the children emerged from the dust like statues, pencils still in hand. She also spoke movingly about Amar, who used to provide avocadoes for her from a fruit market stall. Amar was killed recently by a barrel bomb.

Zaina recounted some of her own experiences of sheltering from the bombings. One night she said the bombing went on for over 12 hours; “I couldn’t count how many bombs hit around us”. A mother she knows gave her children sleeping pills to make sure they slept through the assault. Away from the bombs ‘there is a shortage of everything’. Zaina said “if we are lucky we get two hours of electricity a day and water comes once a week.” The hospitals are struggling not just with war injuries, as people may assume, but “normal diseases”. Newborn babies are dying in Aleppo due to the shortage of incubators, (there are just 3 incubators), and there is a severe shortage of dialysis machines.

Life in Aleppo is also hindered by the travel difficulties. Zaina said what used to be a 10-minute journey in Aleppo could now take 12 hours because of all the checkpoints. This has meant there are friends and families in Aleppo who have not seen each other for over three years.

Zaina explained some of the important work her and other Syrian activists are doing. She detailed one initiative where she had helped local woman write and become journalists. Many of these women now write for the Damascus bureau. She spoke about life under the rebels as an activist and some of the difficulties she faced on a day to basis, but also how they were the ones protecting her from the regime.

Zaina briefly reflected on ISIS and the British response to the Syrian crisis. Regarding the British response she said “we are not expecting anything now, so we are not disappointed anymore.” Speaking about ISIS she said she did not know of any Syrians who had joined but it was “the foreign ISIS fighters who freak the hell out of me.”

Zaina stressed that all the civilians of Aleppo are traumatised by the regimes bombing. She said it is the people of Aleppo who are the real losers in this war: “we are losing our friends, families, and memories.” Zaina’s talk offered a valuable insight into the day to day life of northern Syria and superbly humanised the horror of living under the bombs of Aleppo.