Over 80 UK parliamentarians call on Israel to stop the dispossession of Palestinian families in East Jerusalem, or face diplomatic consequences

Over 80 British parliamentarians representing all parties, in both the House of Commons and the House of Lords, wrote in a letter to the British Foreign Secretary, Dominic Raab that the British government must do everything in its power to prevent the mass/forced evictions and dispossession of Palestinian families in Jerusalem. About 200 families in Sheikh Jarrah and Silwan are in danger of being dispossessed following a legal battle waged against them by settler associations. British lawmakers have made it clear that these evictions, some of which have already taken place, are a violation of international law, and that it is Britain's job to make sure they do not happen.

In the letter, parliamentarians said: "We believe that given the huge scale of this planned dispossession which would amount to the largest displacement of Palestinians since 1967, diplomatic words of concern are insufficient”. They also state that “all measures should be on the table” for  the UK government, “including reducing diplomatic engagement and banning trade in settlement products in full conformity with international law obligations in order to challenge the settler economy that profits from the occupation.”

The letter comes a day before the appeal hearing of four Palestinian families from Sheikh Jarrah. The families are in danger of dispossession due to the claim that the land on which their homes were built belonged to Jews before 1948, but the families cannot claim the properties they lost in ‘48 within the Green Line.

Members of the Britain-Palestine All Party Parliamentary Group recently heard from Palestinian writer Mohammed El-Kurd and Israeli settlement expert, and Director of Peace Now’s Settlement Watch Programme, Hagit Ofran about the looming threat of dispossession that hundreds of Palestinians face in East Jerusalem, in neighbourhoods such as Sheikh Jarrah and Silwan. As neighbours to these Palestinian families in Sheikh Jarrah, the British Consulate in Jerusalem knows full well of the anxieties and trauma that exists, not least because some of our own Consulate colleagues are part of these families.

El-Kurd, whose family was dispossessed in 1948, and were robbed of part of their home in 2009, spoke movingly about living in constant fear that settler organisations backed by the Israeli government will take over their family home. In the coming weeks this fear is very likely to turn to reality. Ofran highlighted how these takeovers contradict international law.

On 9 February, the Israeli courts will hear an appeal on court cases regarding some of these homes, including the El-Kurd family. This verdict could have catastrophic consequences on the lives of many but at its essence this is not a legal issue, but a political one. Israeli settlers as well as government and municipality officials speak openly about wishing to control the demographics of the city. Any actions by the occupying power to alter Jerusalem’s character, status or demographic composition are illegal under international law.

We welcome Foreign, Commonwealth and Development Office statements notably the Minister of State’s response to a written parliamentary question on 22 January.  However, we believe that given the huge scale of this planned dispossession which would amount to the largest displacement of Palestinians since 1967, diplomatic words of concern are insufficient. After all, at the centre of such actions are hundreds of Palestinian families who are facing the imminent threat of displacement or have already endured it.

It is in the power of the state of Israel to stop this injustice. It is the UK's responsibility as a High Contracting Party to the Geneva Conventions to do its absolute most to make that happen. The UK government must urge the government of Israel to put a stop to the forcible transfer of families from their homes in occupied East Jerusalem. The British Consulate needs to ensure that regular visits are made to Palestinian families and communities under threat of mass/forcible eviction and dispossession, in East Jerusalem and across the rest of the West Bank, demonstrating full solidarity and all assistance to them within its power. Events in Jerusalem also have a history of escalating tensions rapidly in a very damaging fashion.

The UK government should make clear to its Israeli counterpart that relations cannot continue as normal in the event of such transgressions.  All measures should be considered including reducing diplomatic engagement and banning trade in settlement products in full conformity with international law obligations in order to challenge the settler economy that profits from the occupation.  Settlements are illegal so such a step is not a sanction but a measure designed to ensure that the UK does everything in its power to ensure it does not assist in such serious breaches of international law. 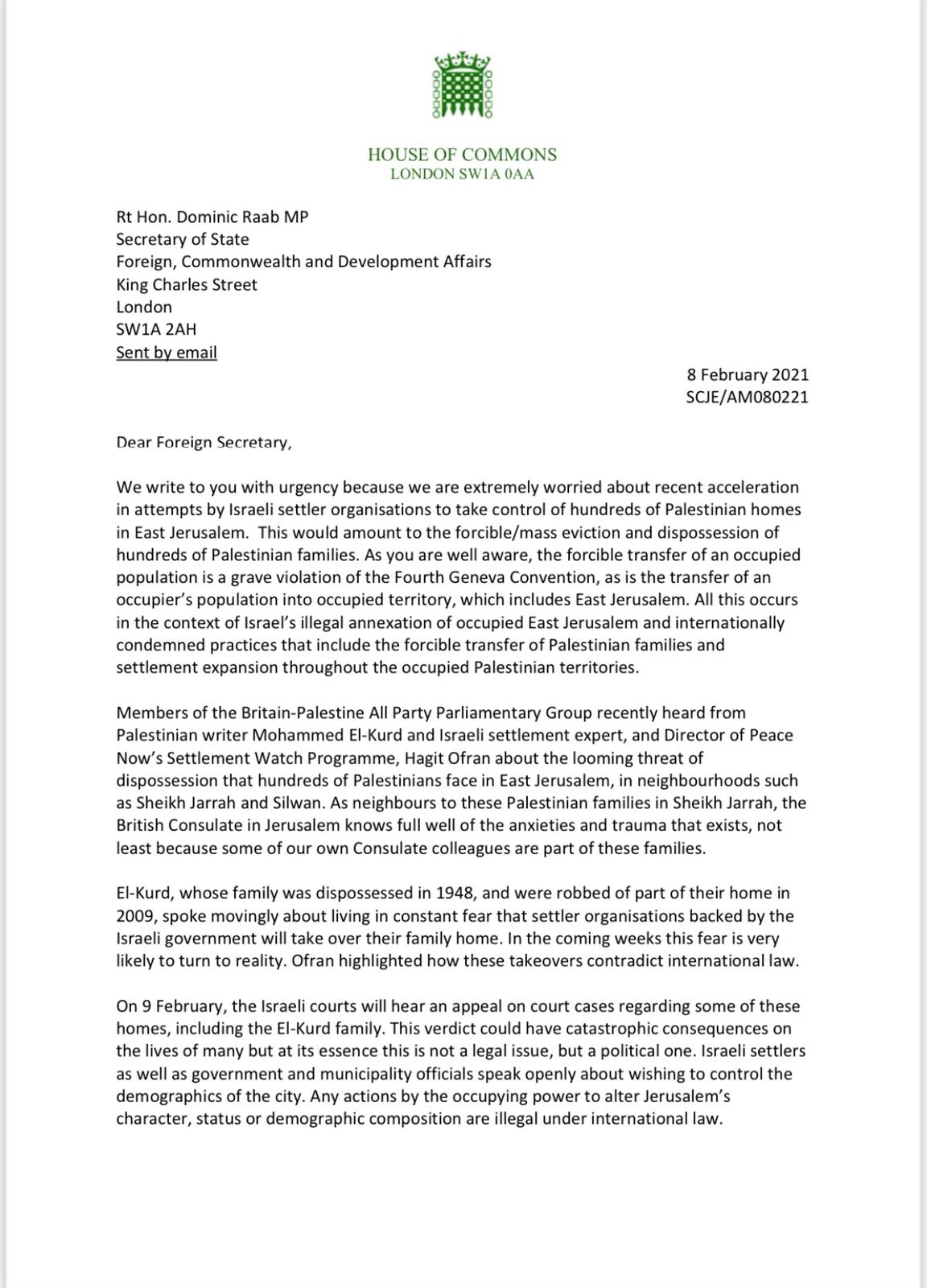 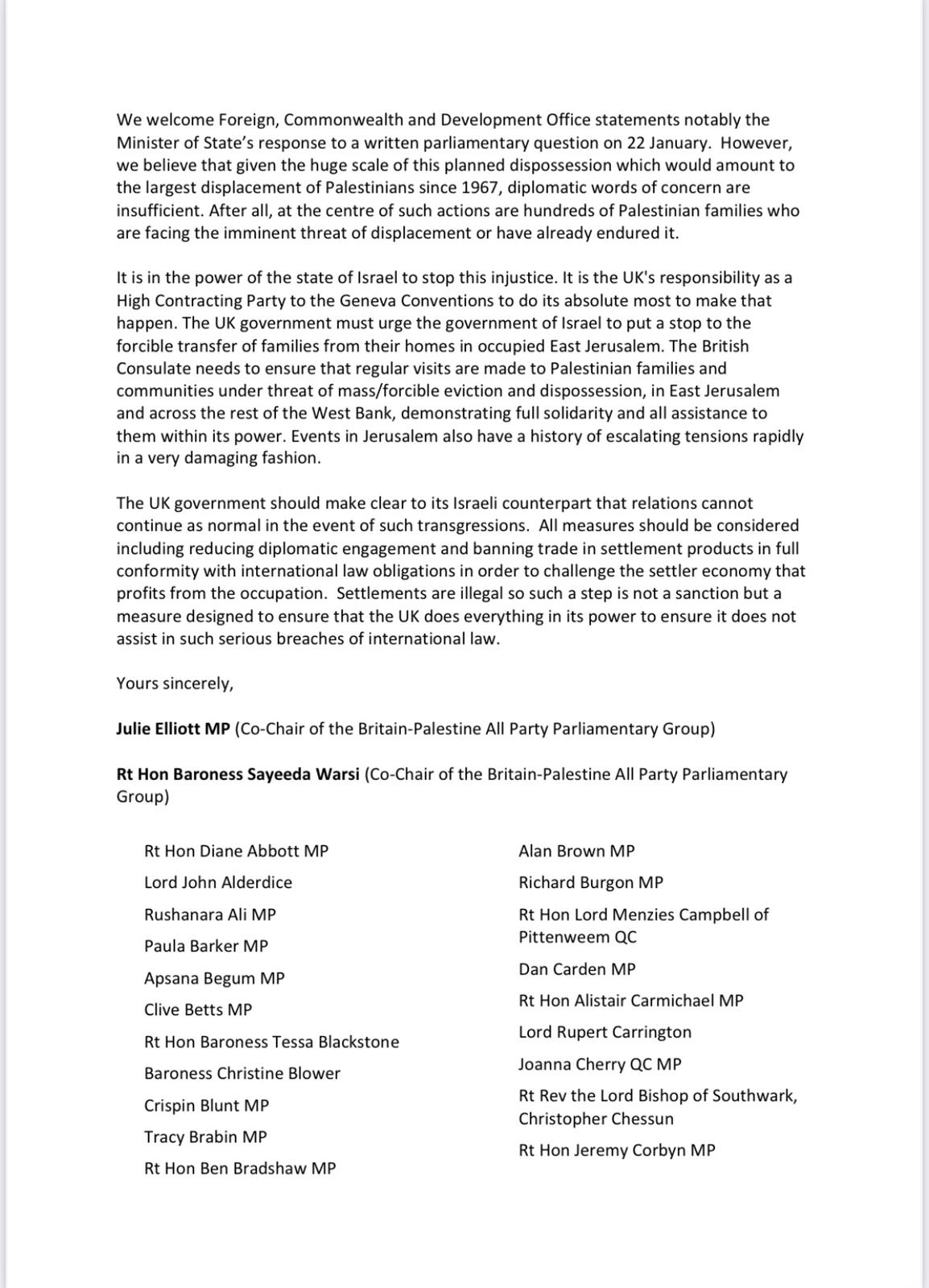 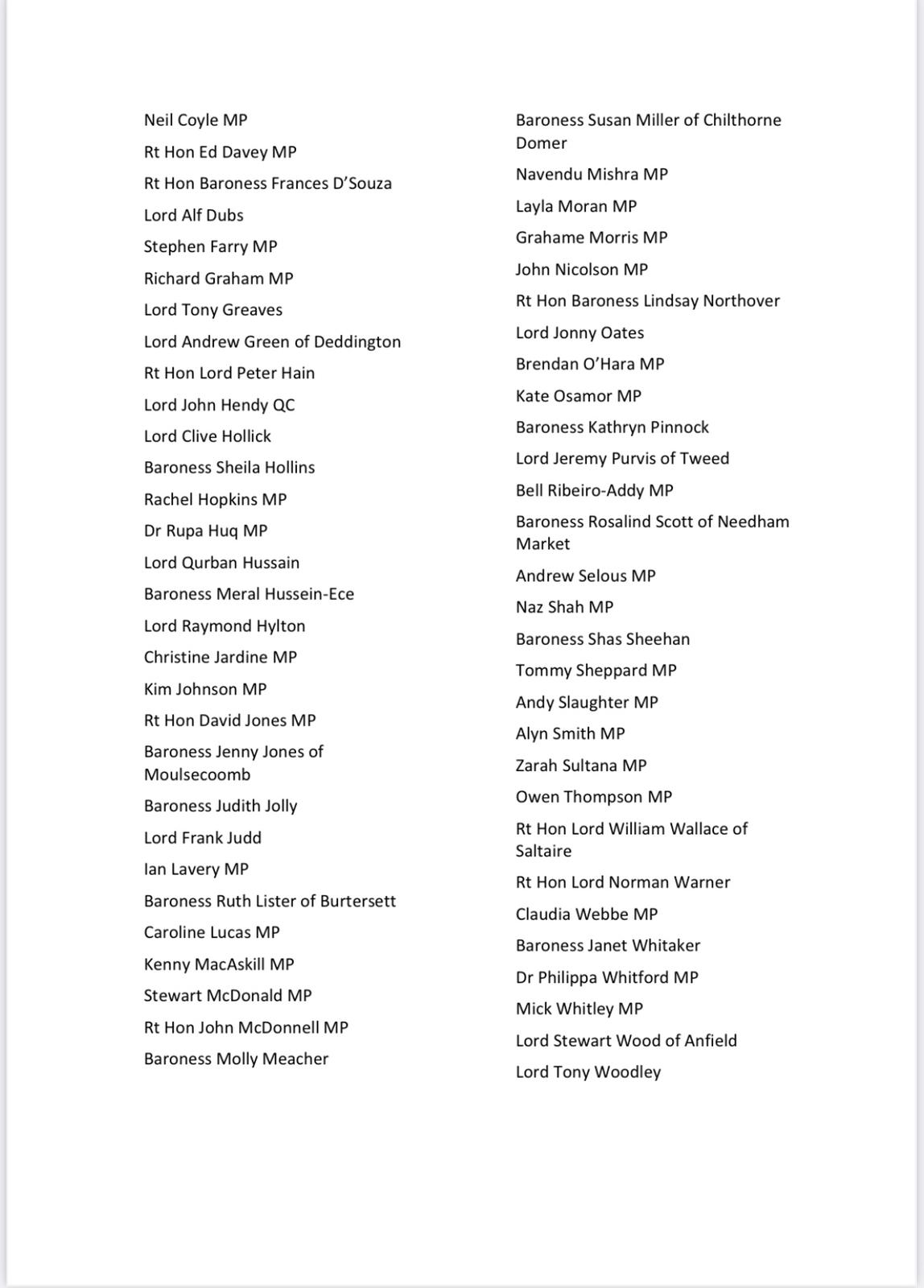 Parliamentarians who have signed onto the letter after it was sent and published: