A group of European Parliamentarians from national parliaments of the United Kingdom, Ireland, Belgium, Denmark, France, Netherlands, Luxembourg, Spain and Sweden and the European Parliament have written to President-elect Joe Biden urging him to work with Europe to promote Israel-Palestine peace based on international law.

The USA, Europe, Israel and Palestine

Many congratulations on your election as President of the United States of America.

We, European national Parliamentarians and members of the European Parliament, wish you, your family, your team and your country well.

We come from parties across the political spectrum, united in our concern for equal rights for Israelis and Palestinians. We know that you share our concern for peace with justice and mutual security. We have read your pledges, and share your commitment to equality and democracy, contributing to peace.

In the past, the United States has shouldered much of the burden of brokering peace between the Israeli Government and the PLO. This was the case with the last serious effort to advance peace – the valiant work of Secretary of State John Kerry. Please know that you are not alone: Europe can and should play its full part, as neighbour, friend and economic partner to both peoples. We need to work together to avert the outcome which Secretary Kerry so greatly feared, and warned against in his last speech as Secretary of State: “How does Israel reconcile a permanent occupation with its democratic ideals? How does the US continue to defend that and still live up to our own democratic ideals?”. He was brave and right to say “The settler agenda is defining the future of Israel”, which he feared would become “separate and unequal”. Prophetic words.

Israel has signed up to many international conventions, freely assuming the rights and responsibilities they entail. Settlements and house demolitions are a grave breach of the Geneva Conventions. All Israeli settlements are illegal under international law - Ramat Shlomo, Ariel, or wherever. All the land occupied by Israel in June 1967 – Gaza and the West Bank, including East Jerusalem – is occupied Palestinian territory. Acquisition of land by force is illegal. Equally wrong and just as dangerous is de facto annexation through systematic and accelerating settlement expansion, including in Givat Hamatos and E1 – intended to make two states impossible - and the destruction of Palestinian communities like Khirbet Humsa. Settlement expansion needs to stop: it is designed to deprive a people of the right to self-determination and statehood.

Under your leadership, we hope and trust that the United States will be a fair mediator, meriting the confidence of both sides. « Do no harm » is a good, prudent precept for the future – but action is urgently needed to undo the harm done in the last 4 years and even now to the rule of law, equal rights and the chances of peaceful coexistence. Please ensure that your Administration implements UN Security Council Resolution 2334, inter alia by reversing the decision to allow US Government funding to assist research in illegal settlements.

We respectfully ask you to reaffirm what is right, and needed if we are to live by international law: that our shared aim is two sovereign states based on the June 1967 line with mutually agreed equivalent land swaps, Jerusalem as the shared capital of both states, an end to the 1967 occupation, security arrangements meeting the needs of both peoples, a just agreement for refugees and equal rights for all inhabitants between the Sea and the River Jordan.

Gaza, where 2 million people have been locked in since 2007, endures today an unprecedented COVID crisis, with local health services unable to cope. As the occupying power, Israel has responsibility to treat the occupied people as it would its own – with a duty to ensure that drugs and medical equipment enter Gaza freely, and that patients can access the West Bank (including Jerusalem) for specialist treatment. The 13-year Gaza blockade must end. It prevents decent human life.

From the Palestinians, we call for strictly non-violent opposition to the occupation of 1967, including an end to all rocket and mortar fire from Gaza. Violence from any side must cease. We urge free, fair elections across the OPT, fulfilling the recent pledge of elections by President Mahmoud Abbas. European Parliamentarians are ready to facilitate, monitor and observe the election process. For their part, our Governments should undertake in advance to respect the choice of the Palestinian electorate and work with their elected representatives. We believe that our Governments’ policy of support for two sovereign states, living side by side, will be enhanced by recognition now of both those states. Parity of esteem for both peoples is essential.

We look forward to working with our counterparts in Congress to find the best ways to agree and consolidate these policy aims. We will encourage our Governments to work diligently with you and your team to achieve our shared goals of equality, democracy and peace in the Holy Land.

A copy of this letter goes to your Secretary of State-designate, Antony Blinken 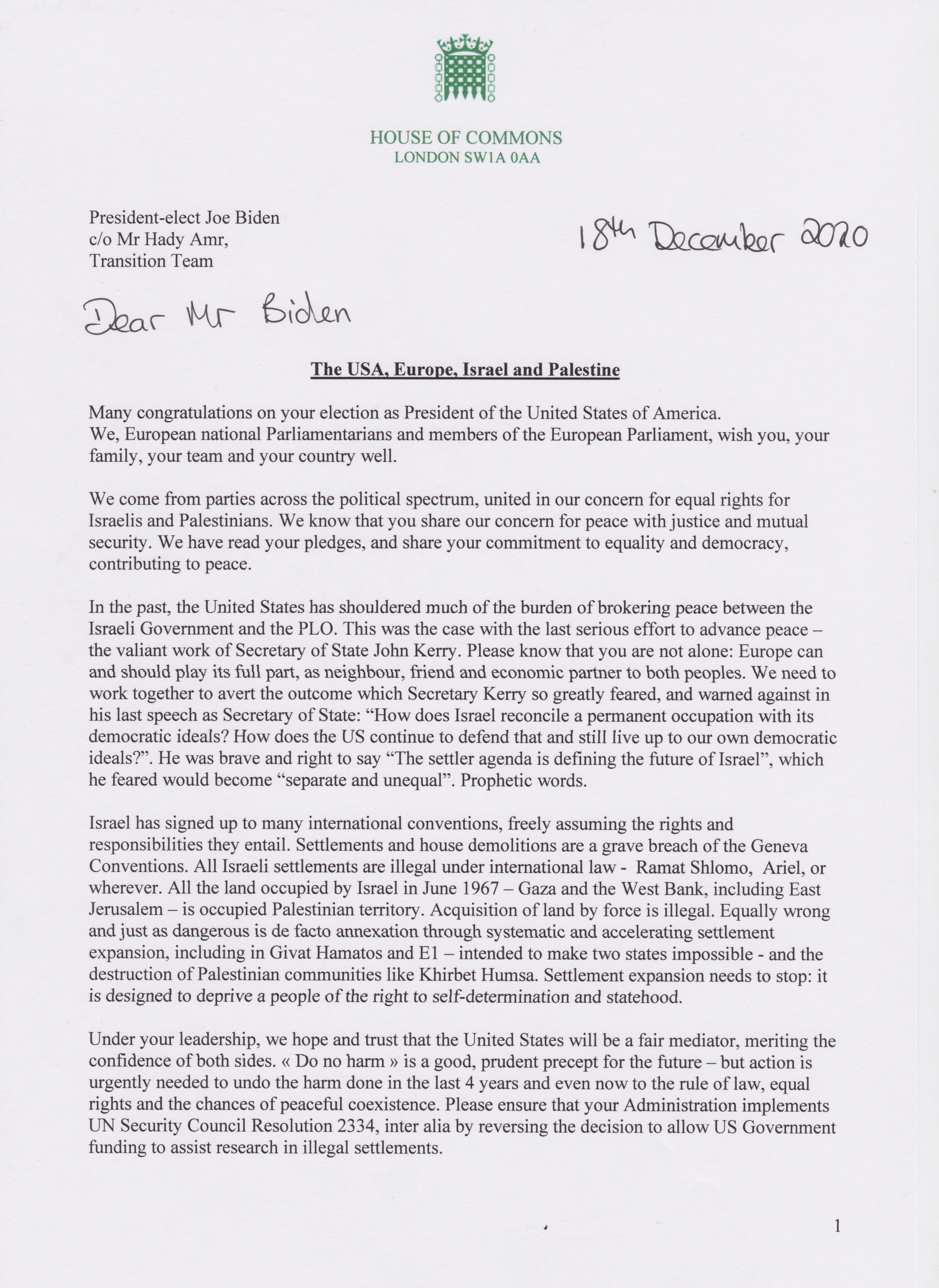 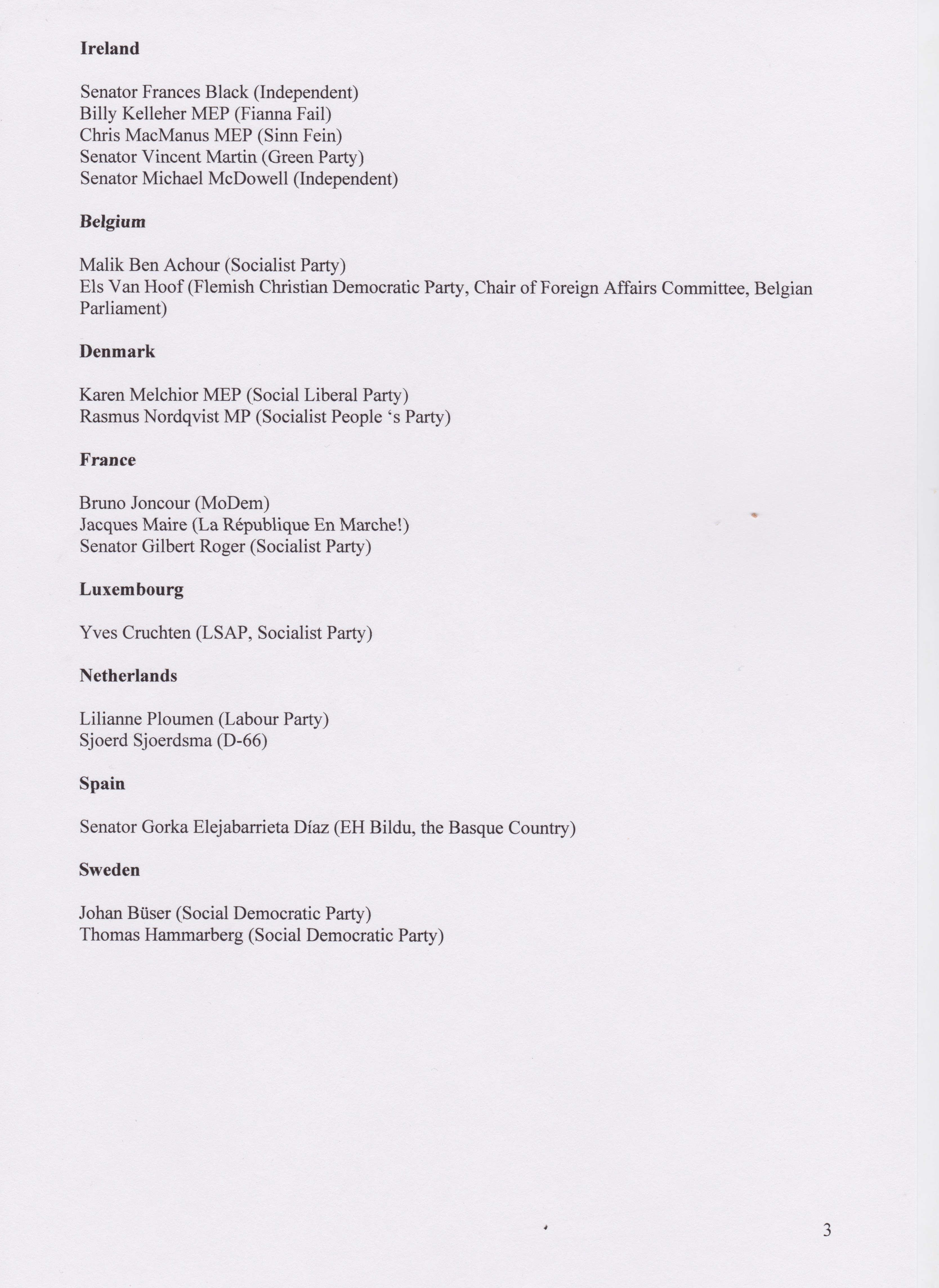