A dereliction of responsibility: UK charities and NGOs alarmed by UK decision not to support UN Commission of Inquiry at the Human Rights Council

Caabu is one ten organisation alarmed by the UK's decision not to support UN Commission of Inquiry report into Gaza protests at the UN Human Rights Council. A PDF of the statement below can also be read here. As of 22 March 2019. 73 British MPs have also signed an EDM welcoming the independent UN Commission of Inquiry report on protests in Gaza. It was tabled by Chair of the All Party Britain-Palestine Parliamentary Group, Richard Burden MP.

As a coalition of UK-based humanitarian, development, human rights and faith organisations working to support the rights and welfare of the Palestinian people, we express alarm at the UK government's decision at the UN Human Rights Council this morning to abstain on a resolution that welcomed the important report of the UN-mandated independent Commission of Inquiry into the 2018 protests in Gaza and the implementation of its recommendations.

The UK's abstention on the Commission of Inquiry's report represents a regrettable dereliction of its responsibility to uphold respect for the rule of international law and human rights. The UK failed to clearly affirm that victims, survivors and their families of serious violations perpetrated by Israel's forces at the civilian protests in Gaza require legal accountability and justice. The  Commission found reasonable grounds to believe that all 189 fatalities were caused by unlawful use of force – with the possible exception of two incidents - and that medical workers, journalists, some children and some people with visible disabilities were shot intentionally.

We now urge the UK to consider whether it is doing all it can to ensure that impunity no longer persists for recurrent and serious alleged violations of international humanitarian and human rights law across the occupied Palestinian territory (oPt). This should include urgently outlining what meaningful steps it is taking to protect civilians and uphold the rule of international law within the oPt.

Notes to the Editor: The Commission’s 252-page impartial and thorough report found that “the use of live ammunition by Israeli security forces against demonstrators was unlawful” in all the cases it investigated – all 189 fatalities (183 by live ammunition) and over 300 of the 23,000 injuries (over 6,100 by live ammunition)– with the possible exception of two incidents. The report made appropriate recommendations in relation to preventing future violations at protests and protecting civilians, prompt access to healthcare for the injured, lifting the closure/blockade of Gaza, and accountability measures for violations committed. For more on the content of the report, please see our one page statement dated 5 March 2019.

Statement endorsed by the following 10 organisations:

Friends of Nablus and Surrounding Areas 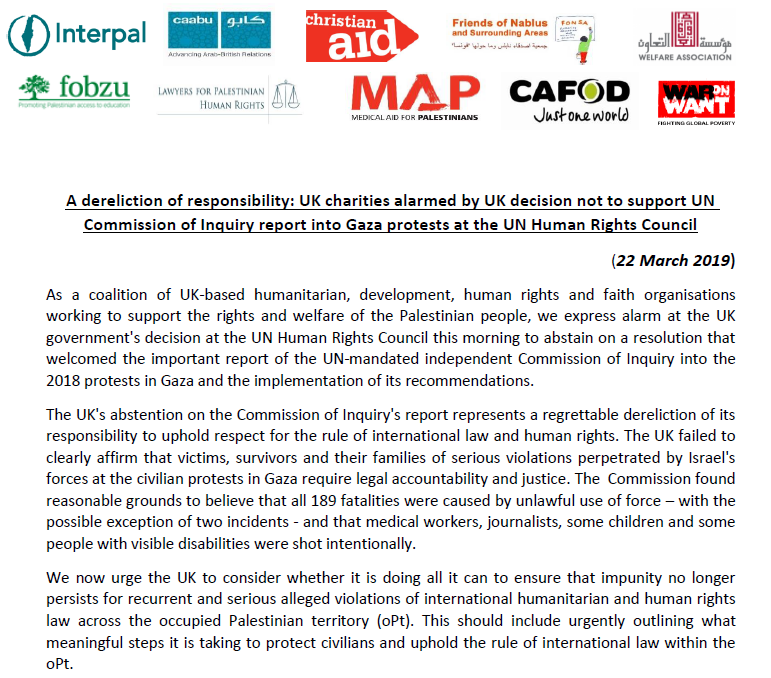