Caabu has endorsed a letter from Sheikh Jarrah families alongside 190 other Palestinian, Israeli, UK-based, and other international human rights and civil society organisations to the Office of the Prosecutor of the International Criminal Court (ICC), calling to urgently include the imminent forced displacement of Palestinians from Sheikh Jarrah as part of the open investigation within the Situation in the State of Palestine. Other signatories to the letter include Al-Haq, Al Mezan Center for Human Rights, B'Tselem, Lawyers for Palestinian Human Rights (LPHR), Na'amod: British Jews against Occupation, The Jerusalem Legal Aid and Human Rights Center (JLAC), The Palestine Institute for Public Diplomacy (PIPD), Women's Centre for Legal Aid and Counselling (WCLAC), and War on Want.

Previously, over 80 British parliamentarians called on Israel to stop the dispossession of Palestinian families in East Jerusalem (including in Sheikh Jarrah), or face diplomatic consequences. The Britain-Palestine All Party Parliamentary Group, also heard from Mohammed El-Kurd, a member of one of the Sheikh Jarrah families facing dispossession and forced eviction. Caabu's Chair Rt Hon David Jones MP and Julie Elliott MP, co-Chair of the Britain-Palestine All Party Parliamentary Group, have also written to the UK Prime Minister Boris Johnson calling for the independence of the ICC to be respected and supported.

Press release for the letter from Sheikh Jarrah families follows:

On 22 April 2021, representatives of 28 Palestinian families constituting approximately 500 Palestinians from Sheikh Jarrah neighbourhood in occupied East Jerusalem, and 191 endorsing organisations, sent a letter to the Office of the Prosecutor of the International Criminal Court (ICC), calling to urgently include the imminent forced displacement of Palestinians from Sheikh Jarrah as part of the open investigation within the Situation in the State of Palestine. Specifically, the families called on her Office to include as part of the investigation the related war crimes and crimes against humanity, including forcible transfer, appropriation of property, persecution, apartheid, and other inhumane acts causing great suffering or serious injury to inter alia mental health arising from their forced evictions.

The letter outlines that following the ruling of Israeli courts in favour of eviction lawsuits undertaken by a settler organisation, 87 Palestinians in the neighbourhood are at imminent risk of forced eviction including four families by 2 May 2021 and three other families by 1 August 2021.

Outlining how the current forced evictions would constitute their second or third forced displacement, the Sheikh Jarrah families highlighted their forcible displacement from their homes in Palestinian towns, cities, and villages, during the Nakba, and their ongoing denial of their inalienable right to return to their homes and properties since 1948. They further underscored the coercive environment they are subject to in Jerusalem, which is designed to transform the city’s demographic composition to secure Israeli-Jewish control over Jerusalem and drive ongoing Palestinian displacement.

The Sheikh Jarrah families continue to endure a lengthy, exhausting, and unaffordable legal battle since 1972 in order to confront the eviction lawsuits brought against them by a settler organization before Israeli courts, which unlawfully apply Israeli discriminatory domestic law to the occupied territory. The families are now pursuing accountability before the ICC. 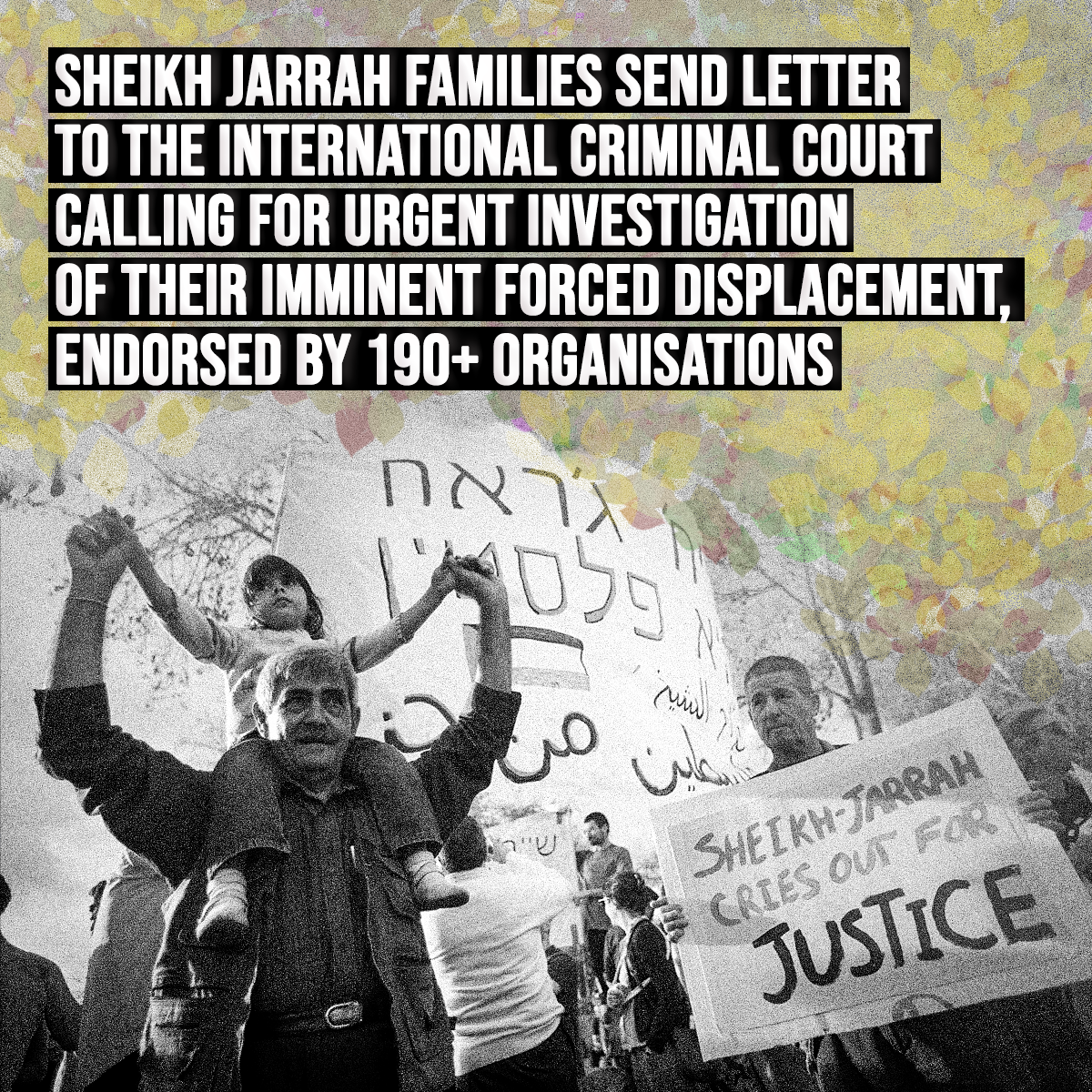