The Egyptian Ultras as Revolutionary Players

The Egyptian Ultras as Revolutionary Players

On 25 January, Egypt marked the fifth anniversary of the 2011 revolution that toppled long-time ruler Hosni Mubarak. For the first time since 2010, the day passed rather inconspicuously. Several small demonstrations numbering in the hundreds did take place, mostly made up of Muslim Brotherhood members and supporters, but these were quickly dispersed by police and security forces. Secular activists, unlike previous years, did not organise protests of their own.

This relative lack of protest in no ways signifies unanimous approval of the status quo under current President Abdel Fattah al-Sisi. Thousands of Egyptians did mark the anniversary by resorting to social media with the hashtag #I_Participated_In_January_Revolutionfor instance. What it does reflect is the overwhelming difficulties and dangers facing dissident voices in light of an intensifying crackdown of opposition movements. In 2015 alone, it is estimated that 474 Egyptians died at the hands of the security forces and over 600 were tortured while in detention. In the run up to this year’s anniversary the crackdown only increased. Over 5000 homes in central Cairo were raided to prevent street protests. On 25 January itself, the government dispatched 180,000 security forces across the country to ensure ‘quiet’.

A week later on 1 February, thousands of people could be found chanting anti-government slogans in public. Again on 8, February, a smaller but still significant number gathered in grievance chanting ‘open up we are dying’. Such crowds were not made up of Muslim Brothers or political activists but hardened football fans known as ‘ultras’. The initial gathering featured ultras from Egypt’s most popular football club al-Ahly, who were honouring the fourth anniversary of the Port Said stadium disaster in which 74 people were killed, including 72 al-Ahly ultras. The following one consisted of ultras from al-Ahly’s rival Cairo club Zamalek, in honour of the 22 people killed last year while trying to make their way into a football game. The fact that such protests emerged in the context of the regime’s expanding crackdown is noteworthy in itself, but to what extent do these groups and such events represent real resistance to the powers that be? 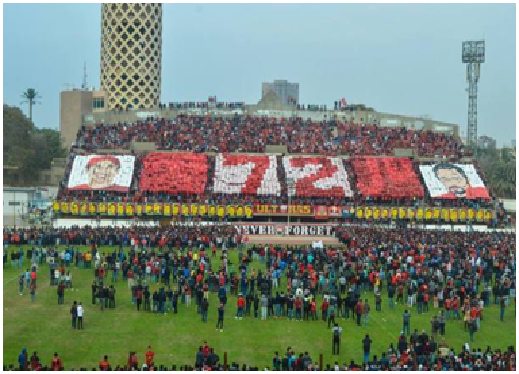 Politicisation of the Ultras

To answer this question it makes sense to first look at the history of the political involvement of the ultras in Egypt since their emergence in around 2007. Although not explicitly political, built around deep commitment towards their respective clubs, the ultras’ sheer presence and demands for autonomy within the stadium ensured that they were still considered a threat by the authoritarian Mubarak regime. As such the security forces, the state’s chief representatives in the public arena, adopted a heavy-handed approach towards the ultras, who radicalised in turn. Their experience was therefore constantly marked by a series of particularly violence frequent clashes with the security forces.

The 2011 revolution proved to be a real turning point as they took this confrontation from the stadium to the street.  The ultras constituted one of the more unforeseen groups to emerge on the ground and played a key practical role in the demonstrations which eventually led to the removal of Hosni Mubarak, using their experience in physical confrontations to defend front lines throughout different clashes with the Mubarak regime. In addition to any personal convictions relating to the broad ideals of freedom and democracy, it is easy to see why ultras made such a collective connection with the revolutionary protests. The 25 January revolution, signalled by National Police day, reiterated what ultras had already known in the sense that Mubarak’s Egypt was a police-driven state.

After 2011, ultras continued to form a consistent part of the opposition movement mobilising on the streets and applying pressure on the transitional SCAF and successive governments to deliver on the ideals of the revolution, particularly in demanding reform of the security forces.  Such continued challenge against the ruling regime came at tragic costs, giving state forces a desire for retaliation.

Tragedy in Port Said and Cairo

The tragedy in Port Said was a riot which occurred on 1 February 2012 following a football match between Port Said’s al-Masry and Cairo’s al-Ahly, with unknown assailants, seemingly al-Masry spectators, storming the stadium following the match and violently attacking the al-Ahly fans and their ‘Ahlawy’ ultras in particular, killing 74 people overall including 72 ultras. While ultra groups accuse security officials and SCAF of actively planning the massacre and the interim government blames the violence purely on football ‘hooligans’, evidence indicates that there was at least some degree of state complicity, highlighted most evidently by the lack of intervention from the police and numerous security officials as the violence unfolded.

The tension is just as great between the state and Zamalek’s ultras, known as the Ultras White Knights, epitomised by their ongoing feud with the club president Mortada Mansour, a pro-regime figure. As far back as 2011, he stated that ‘the ultras are only interested in violence’, his heart seemingly set on punishment rather than toleration. It is in light of this tension that many ultras view the tragedy on 8 February 2015 where 22 fans of Zamalek died outside of a stadium in eastern Cairo ahead of a match. Ultras White Knights called it a ‘premeditated massacre’, blaming the security forces who apparently shot multiple tear gas canisters into the midst of thousands of fans confined in a narrow passage lined with barbed wire. Egyptian authorities dismissed any responsibility on behalf of the security forces, labelling it as simply a ‘stampede’ and pinning the blame on ‘ticketless’ fans trying to break into the ground. For James Dorsey, an expert on the ultras, the idea that Zamalek’s Ultras White Knights were intentionally targeted is neither ‘an unreasonable conclusion’ nor ‘an established fact’. Amid the conflicting assertions we can indeed conclude that both incidents highlight once again the animosity between the ultras and the security forces.

In both cases, the tragedies put the ultras on a determined quest for retribution and legal justice for the fallen martyrs. The Ultras Ahlway managed to achieve a degree of success. Some defendants in the slow-moving trail have receivedverdicts, ranging from one year to death. But whereas some Ahlawy members are content, others are incensed that of the nine security officials charged for the incident, only two were actually given sentences, seemingly highlighting the lack of accountability of Egypt’s security forces. During the recent protest on 2 February, technically the biggest organised protest against the regime since 2013, the al-Ahly fans demanded that formerdefence minister Mohamed Hussein Tantawi, who was the country’s de facto leader in 2012, be held accountable for the deaths. Responding to this recent protest, Sisi seems to be adopting a more deft approach, even inviting the Ultras Ahlawy to participate in a committee to investigate the 2012 Port Said event. Is he willing to hold such figures accountable given his own ties with them as a military figure?

The Ultras White Knights have been more restrained in relation to the upcoming trial of their ultras in connection to the ‘stampede’, aware of the brutal nature of the Sisi regime towards them. This reflects other groups who have suffered from the repressive crackdown following the popularly-backed coup in July 2013. First, the Muslim Brotherhood and its supporters faced a bloody crackdown and were eventually banned. Soon afterwards the crackdown widened to target other potential opposition such as the secular activists at the forefront of the revolution. Even the April 6 Youth Movement, the largest organised group of young pro-democracy activists, was outlawed. In similar fashion, in 2015 ultra groups were also banned as ‘terrorist organisations’, for violating Egypt's draconian anti-protest law. Many ultra members, particularly from Ultras White Knights who Mansour has a long rivalry with, are facing long prison sentences.

Although like other opposition movements the ultras are facing an increasingly precarious situation, they are still serving to challenge the status quo. Their political demands, while more limited than some, still have real significance. The areas which they focus on are the Interior Ministry and the judicial system which formtwo of the four key sectors, alongside the economy and political arena, which require considerable reform in Egypt.  Such powerful institutions have remained largely intact since the 2011 revolution and therefore unable to provide accountability for thousands of deaths. It is a struggle which unites a diverse range of Egyptian citizens. On 12 February, thousands of doctors gathered in protest at police brutality after accusations were made that two doctors were beaten up by policeman in a Cairo hospital. A week later on 19 February, hundreds protested after the death of a taxi driver killed at the hands of a police officer. As with such groups and protests, the ultras can prove to be a key force in any sort of transition towards less unjust and more accountable rule.

Watch a clip of the February 1 protest here: