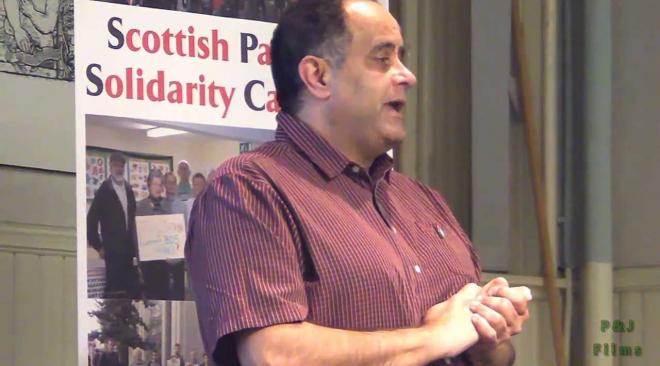 The event is for Caabu members only. If you would like to join Caabu as a member, please sign up here: http://caabu.org/members.

Places are limited, so please make sure you RSVP to Joseph Willits (willitsj@caabu.org).

Musheir El-Farra is the Chair of Sheffield Palestine Solidarity Campaign. He was born in 1961 in Khan Younis, southern Gaza. El-Farra is a political and human rights activist and a public speaker who has worked for justice for Palestinians all his life.

He frequently contributes articles to Arabic newspapers on social and political issues. He has also written, coordinated and narrated documentary films on Palestine.

El-Farra took part in a Free Gaza Movement protest to break the Israeli naval siege of the Gaza Strip: on 23 August 2008, two fishing vessels were the first to enter Gaza port in 41 years.

The book is the story of 17 families who lost loved ones; their pain, their hopes that were shattered; the vacuum that was created by their loss; the ordinary life of their kids who played football; loved animals or music; have been mischievous; average or brilliant at school. The book also presents the cases of four people who survived the war but ended up suffering severe disabilities. The book also details the circumstances of their death or severe injury. The politics are also present in a very clear way.

Musheir tried to ease the trauma of the stories for the Western readers by linking up the stories with my childhood memories of the Gaza Strip; how it used to be and how it is now.

He obtained the cases of these victims from Al Dameer Association for Human rights in Gaza which prepared a document which represents good ground for filing a case against a number of Israeli political and military leaders accusing them of committing war crimes. I went to Gaza twice in December 2100 and 2012; I interviewed the families of the victims as I wanted to touch on the human side as well as the political.

The book is not a call for revenge but rather for justice for these families as well as hundreds others. It also represents a document which can be used to bring charges of War Crimes which were committed by the Israeli army during the war on the Gaza Strip".
The book was published by Sheffield Palestine Solidarity Campaign. You can purchase the book here.

All proceeds will go to children's projects which Sheffield PSC has been supporting in Jabalia and Nussairat refugee camps and Khan Younis in the Gaza Strip.

You can keep track of the event by following @Caabu on Twitter. Keep up to date with Caabu's work by 'Liking' ourFacebook page.

If you would like to attend this Members' event with Musheir El-Farra, please RSVP to Joseph Willits (willitsj@caabu.org).  If you wish to sign up as a member in order to attend the event please click here: http://caabu.org/members