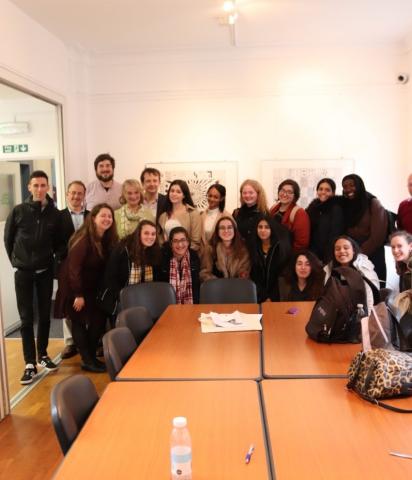 Shortly after the end of the 1967 war, a group of distinguished politicians, journalists, academics and others with an interest in the Arab World gathered on the terrace of the House of Commons. Their aim was to address the lack of a clear voice in British politics that valued relations with the Arab world and was prepared to stand up for Arab and Palestinian rights. Caabu was born.

The first Director was Michael Adams, a distinguished journalist who had reported on the 1967 war but had fallen out with the Editor of the Guardian at the time who had refused to publish Michael's accurate reports on the destruction of the three villages of Amwas, Beit Nuba and Yalu in the Latrun salient. He was succeeded by John Reddaway, the two of them played a key role in laying the foundations of Caabu as a major force in British politics.

This was no easy task. Members of Parliament, such as Ian Gilmour, David Watkins, and Sir Dennis Walters, were continuously harassed and barracked in the House of Commons for daring to speak out about Palestinian rights. Today, owing to the courage of their predecessors and Caabu’s hard work promoting these rights, things have drastically changed. However, although many politicians from different parties frequently stand up for such rights, British foreign policy frequently fails to uphold them.

From the start, Caabu was a cross party organisation, with Members of Parliament from all the main political parties. Over the years, we have continued to reach out to all sectors of British politics and to engage with Arab communities here in the UK.

From its very early years, Caabu has also taken on a strong educational and media role. In 1967 a public opinion poll showed that 98% of the British people knew little or nothing about the Arab world and negative stereotypes about the region and Arabs were commonplace in the media.  In 2017 a You Gov poll commissioned by Caabu and Arab News showed that this was still as high as 81%. Challenging anti-Arab racism and Islamophobia, has remained at the heart of Caabu’s work not least with the rise of hate crimes, anti-Arab and anti-Muslim sentiment.

Moreover, the 2017 poll found that most Brits are dissatisfied with UK foreign policy on the Arab world, with 57 percent saying it has been largely ineffective in upholding human rights and promoting global security.

Today, at a time of great change across the Arab world, our role is as crucial as ever.