They say the camera never lies. Everything I’ve seen and heard on TV about the plight of Middle East refugees was borne out by four days working in Athens recently, with migrants in the squatter communities around the city’s historic university and anarchist quarter.

Former office blocks, schools and abandoned government buildings provide around 6 hubs in this community, mostly squats, taken over with various degrees of permission. They’re within a square mile of dense, mature city, home now to migrants who have risked their lives, savings and sanity to escape war, fear and personal oppression.

There’s D who, five years ago, at 18, started university in Syria, a Christian who was excused conscription because he was studying pharmacy. A year later the derogation was reversed but rather than sign up for Assad’s army he transferred to Beirut to study where, a few months later, he heard that his parents and two siblings back home had been killed. He finished his degree and a few weeks ago invested his savings in the traffickers to take him to the west. After a couple of false turns (deliberately, to extract more money?) he found himself in Greece, with nowhere to go, no money left and no way forward; just a pharmacy degree, excellent English and a blend of hope and acquiescence.

K had been a nurse in Iraq for over 20 years. This family man was proud of his Kurdish health service but the day he came home to find his village razed to the ground, by ISIS, he knew it was time to flee. He rounded up his wife and child and within days they were transported, at great cost and by mysterious men, to the Greek Islands and hence to Athens. Three weeks ago the wife and child had bought their way to Germany on a bus. ‘I don’t know how the traffickers did it,’ he said, but they took all the money he had and he could see no way to be reunited with his family.

M, an Afghan, had also been on the islands: ‘Our boat set off at night for the mainland and was intercepted by police,’ he said. ‘It was dark, we were scared: then we cheered! This was the Greek police, not the Turks. We’d made it!’ M had walked from Afghanistan to the Turkish coast (‘Actually, I occasionally did a few miles by taxi’) to avoid most of the traffickers’ costs. Another boy told me he was one of 90 on a 9 metre inflatable boat which had been sinking with a puncture when they were caught. ‘I’m from Afghanistan, of course I can’t swim’.

Few of the refugees are able to work but some are in the informal economy - ‘there’s always demand for a barber!’ smiled a Pakistani man. ‘I admit, I’m an economic migrant’, confessed an Algerian baker, impressed that I knew his home town of Oran, as he settled down to sleep on a sofa. It was 3pm: bedless, he would be on the streets all night, once the drop-in centre closed.

Then there was N, a man of passive disposition, huge dignity and an educated smile: a former policy adviser. Married to a politician who’d gone before him and reached a camp in Europe proper, internal Kurdish politics had driven him and his two delightful children - the daughter, an aspiring microbiologist with perfect English - to leave it all behind. And go where? He would not have chosen Greece, where the economy can barely support its own people let alone tens of thousands of penniless visitors. Nor would he have chosen Britain: ‘Brexit?’ he said: ‘You’re crazy. Oh, what will happen to Ireland now?’ We met in a busy make-do community centre where everything was free, even the cafeteria. It was popular with refugees for its language classes in English, German and Farsi, advice bureaux, yoga, library and creche. These were all managed by young northern European and American volunteers, almost all white, mostly women, abounding in piercings, tattoos and dreadlocks - plus the occasional English public school background. 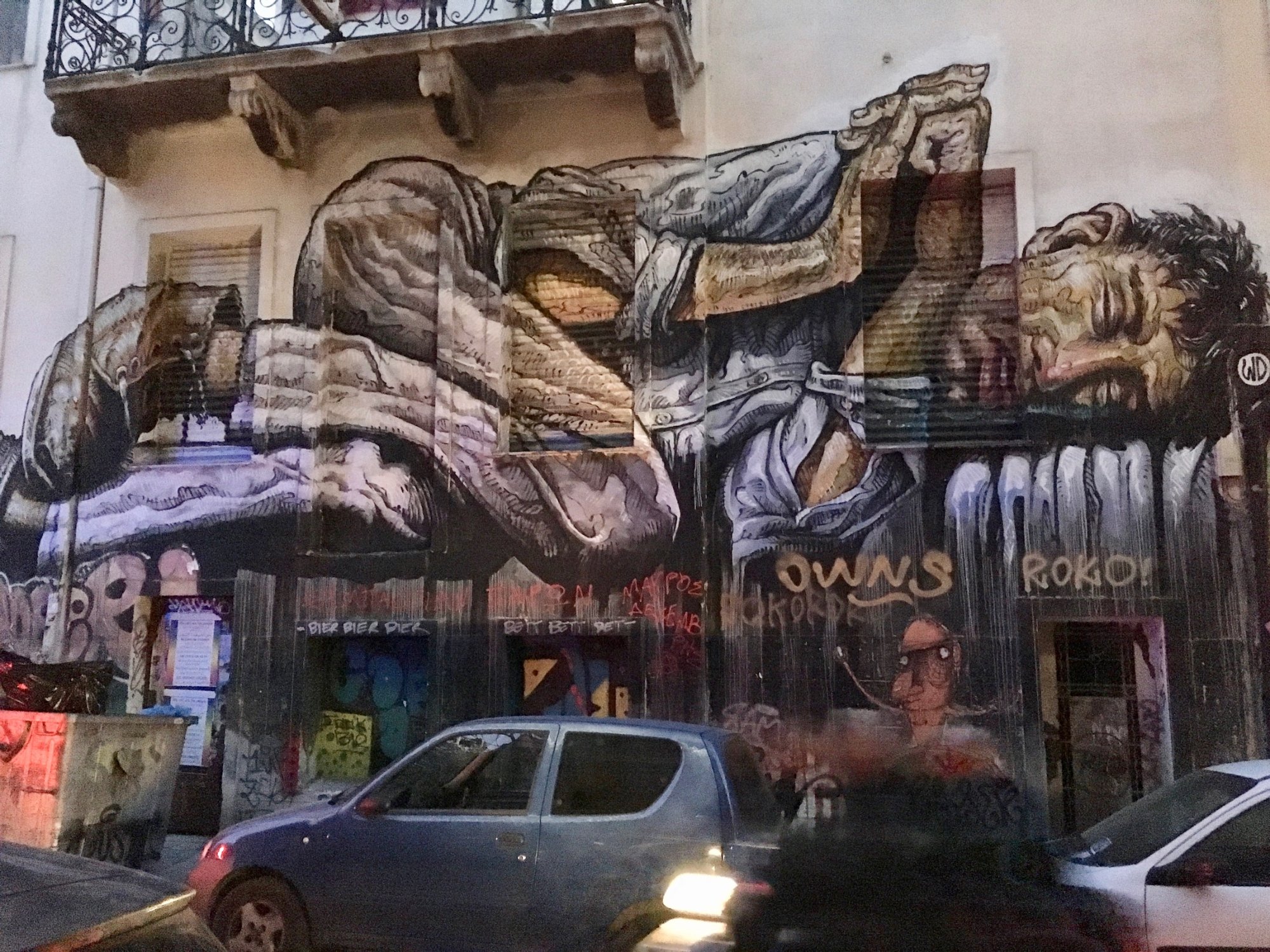 Welcome to the anarchist community: ‘We don’t work with the NGOs’, a young woman stressed to me on day one. This was apparently the only condition I had to swear to uphold before being let in to offer English conversation to the day visitors. Not working with NGOs (or governments, naturally) meant that what benefits were available in the camps outside the city - such as regular, small cash payments - were not provided here.

The squat where we gave English classes to giggling pre-teen Afghan girls was home to dozens of families, from every Middle East country and beyond. I gave our star pupil - a girl of 11 - a globe the size of a grapefruit. She loved it, fascinated: ‘That’s Greece? Really? And England - so small!’

The building had been attacked by fascist fire-bombers a few weeks earlier, fortunately without injury. Scorch marks on the outer wall were worn like a proud badge. ‘Locals accept us’, I was told, ‘they bring us gifts. They’re almost as poor as we are.’ The previously generous state pension in Greece was recently halved; acceptance isn’t the same as celebration. Gifts too came from abroad: on one day a convoy of 26 anarchist vans and lorries arrived from France, Belgium and Spain, with clothes, bedding and food. The street was like a scene from Mad Max, without the guns. Was this the right way to do things, I thought: what had the convoy cost? What if, instead of practical things, they’d sent money? A Euro in Greece goes further than a Euro in France. More to the point, if the refugees had money, even the same pittance as they’d get as of right in the camps outside the city, they might not only choose with dignity what to eat or wear but they’d be contributing to the hog-tied Greek economy, making together perhaps a significant contribution to the businesses that were so struggling around them, yet so separate from them.

Like the refugees, the anarchists were themselves an international band, set apart from the mainstream of their own societies, deliberately, preferring to avoid contact with authority. There were local traditions to uphold: it was in this area that the riots of 1973 undermined the junta and triggered democracy. The reputation of the locality for its wall art pre-dates the refugee crisis: ’graffiti' isn’t a Greek word for no reason.

Stepping out of ‘the system’ is risky. Few of the refugees I met had yet become hardened or cynical. Yet whatever hope they had left was theoretical, just about triumphing over experience. For how much longer? Whatever they were fleeing from had changed their lives forever before they even left and, where the trigger for departure was war, was changing them still - and not for the better. Yet these were people who had once had ambition, plans, families. They still have smiles, however rueful, even the ability to laugh. One joked ‘Put me in your suitcase, take me to London!’

These were the lucky ones: they’d got away, in most cases because they could afford to - back then. Every one of the adults and many of those younger understood the politics behind their situation and the reality of their slim prospects.

They were people with families who had done what they felt was best. They appreciated a degree of rules and order, unlike their polite and generous hosts. Whilst the risks they were taking in the manner of their migration were always odds-against success, this was better than the near certainty of humiliation, degradation and possible murder at home.

Tom Levitt is the former Labour MP for High Peak. In 2014, he set up Sector 4 Focus to build on his extensive experience working with community and voluntary sector organisations.