1,080 European Parliamentarians from across 25 countries in Europe (including 248 British parliamentarians) have rejected Israel's planned annexation of illegally occupied Palestinian territory in the West Bank. Caabu has assisted with getting signatories for the letter sent to various European foreign ministries, initiated by Israeli figures Avraham Burg (Former Speaker of Knesset and Head of the Jewish Agency), Professor Michael Ben-Yair (Former Attorney General of Israel and acting Supreme Court Judge), Professor Naomi Chazan (Former Member and Deputy Speaker of Knesset) and Zehava Galon (Former Member of Knesset and chair of Meretz Party).

Coverage of the letter can be found in the BBC and Haaretz. The letter can be read in full here. A letter initiated by Caabu was also sent on 1 May 2020 from 149 British Parliamentarians calling for sanctions to be imposed on Israel in the event of annexation.

Joint letter by 1.080 parliamentarians from 25 European countries* to European governments and leaders against Israeli annexation of West Bank

We, parliamentarians from across Europe committed to a rules-based global order, share serious concerns about President Trump’s plan for the Israeli-Palestinian conflict and the imminent prospect of Israeli annexation of West Bank territory. We are deeply worried about the precedent this would set for international relations at large.

For decades, Europe has been promoting a just solution to the Israeli-Palestinian conflict in the form of a two-state solution, in line with international law and relevant UN Security Council Resolutions. Regrettably, President Trump’s plan departs from internationally agreed parameters and principles. It promotes effectively permanent Israeli control over a fragmented Palestinian territory, leaving Palestinians with no sovereignty and giving a green light to Israel to unilaterally annex significant parts of the West Bank.

In line with the Trump plan, Israel’s new coalition agreement states that the government can move forward with annexation as soon as 1 July 2020. Such a move will be fatal to the prospects of Israeli- Palestinian peace and will challenge the most basic norms guiding international relations, including the UN Charter.  We are profoundly concerned about the impact of annexation on the lives of Israelis and Palestinians, as well as its destabilizing potential in a region on our continent’s doorstep.

These concerns are no less serious at a time when the world is struggling with the COVID-19 pandemic, the largest collective emergency we have faced for decades. In appreciation of Europe’s long -term commitment to a peaceful resolution of the Israeli-Palestinian conflict, we ask European leaders to act decisively in response to this challenge. Europe must take the lead in bringing international actors together to prevent annexation and to safeguard the prospects of the two-state solution and a just resolution to the conflict. European representatives, including EU High Representative Josep Borrell, have stated that annexation “could not pass unchallenged”. We fully support this: acquisition of territory by force has no place in 2020 and must have commensurate consequences. Failure to adequately respond would encourage other states with territorial claims to disregard basic principles of international law. The rules-based global order is central to Europe’s own long-term stability and security. We have a profound interest and responsibility to protect it.  A lasting solution to the conflict must meet the legitimate aspirations and security needs and guarantee equal rights of both Israelis and Palestinians. Europe has the diplomatic tools to promote this just goal, and we stand ready to support such efforts. 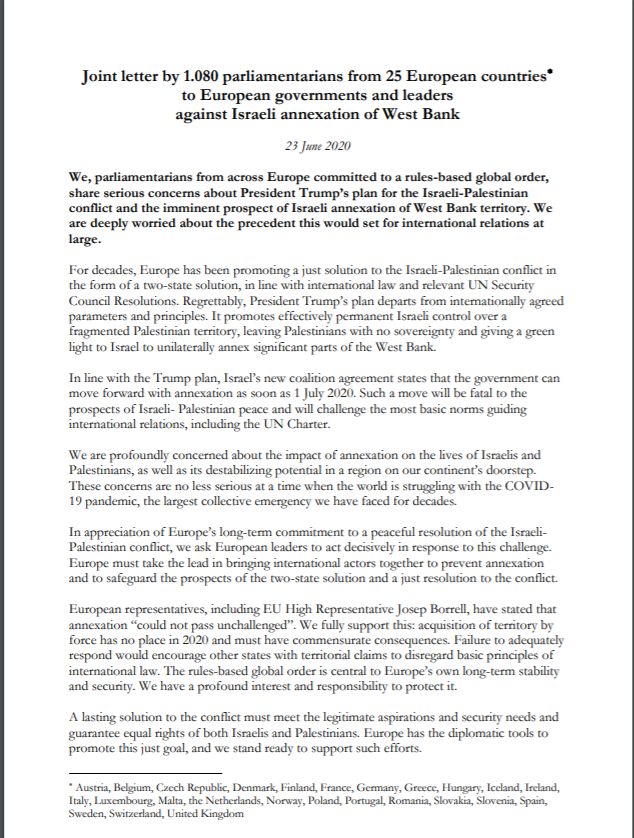